From Parts Unknown to Witch Hunters, filmmaker Rick Chandler has his own unique spin on the Horror genre. Rick recently joined Mike for an interesting and hard-hitting Messier Mantra two-part interview!

Episode One with Rick is about his own film work; Episode Two is a hard hitting discussion between Mike and Rick about lessons learned – of what to do and what not to do – when making an independent film!

SHARE at will and support your local independent filmmaker!

AND HERE IS EPISODE ONE! 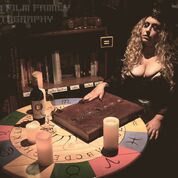